With summer just around the corner, cocktail season is coming, and one of the most common would no doubt be the Cuba Libre (colloquially known as a ‘Rum and Coke’ – rather more boring). This highball cocktail like many is of debatable origin, suggestions including being invented by expatriates avoiding prohibition in the 1920’s to Bacardi’s flawed account that it was invented during the  Spanish-American War when an American general ordered this drink in Havana. Seeing how much he enjoyed it, his soldiers ordered a round, toasting the newly-freed country by shouting ‘¡Por Cuba Libre!’ (Issues have been raised with his account as the introduction of Coca-Cola to Cuba happened 2 years after the other events, however it still remains the official account.) 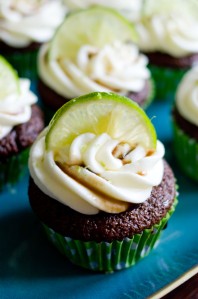 The cake recipe is taken from Coconut and Lime blog, from here. 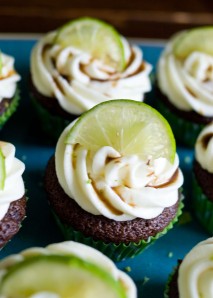 Preheat the oven to Gas Mark 5 and line a 12-hole tin with cupcakes liners. Melt the butter, Coca-Cola and Rum in a small pan and bring to the boil, before removing from the heat and allowing to cool. Mix the milk and the lime juice in a cup and leave for about 10 minutes – this will split and look disgusting, however it is correct, so trust me! Sift together the remaining dry ingredients and mix briefly before beating in the cooled butter/Coca-Cola/rum mixture. Beat in the egg and the milk mixture and mix to form a thin batter. Fill the cupcake cases to about 2/3rds full, and bake in the oven for 20 minutes, until an inserted toothpick comes out clean. Remove the cupcakes onto a wire baking rack and leave to cool completely.

Make the chocolate ganache by heating the cream to nearly boiling point, and pour over the dark chocolate, stirring until melted and combined. Add the lime zest and leave to cool. Remove the centre of the cooled cupcakes using either a cupcake corer or a sharp knife, and spoon a little ganache into the centre of each cake.

Make the buttercream by mixing the butter, icing sugar, milk and rum until light and fluffy – about 5 minutes with an electric mixture.  If it is a little thin, then add in a little more icing sugar. Transfer to the piping bag and pipe onto your cupcakes, ensuring the ganache-filled centre is covered.

Finally, reduce the Coca-Cola and sugar in the pan until it is thick and syrupy. Leave to cool and then drizzle over the top of your cupcake, before decorating with the slice of lime and the lime zest.

Enjoy, preferably set outside with an actual Cuba Libre.

Published by The Wayfaring Baker

View all posts by The Wayfaring Baker