What is the first thought that comes to your head when I say ‘Karl Marx’? I would assume that those two words are not going to be automatically followed by ‘Confectionary Factory’, but that is in fact what we will be thinking about today. The company is the biggest company of this type in Ukraine and was named in honour of the philosopher and socialist’s 105th anniversary. Personally I feel that we should start a trend – desserts would make complex political thought far more accessible. I’m suggesting ‘Descartes Desserts’, ‘Confucious’s Confections’ and ‘Kant’s C/Kakes’ – any other suggestions? 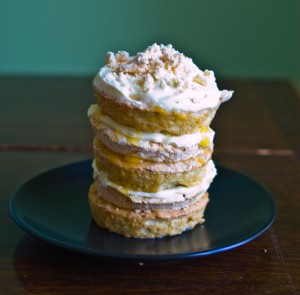 Before you all think I’ve gone completely off my head, there is a link to all this. Today’s cake from the Ukraine is this delicious delicacy, the ‘Kiev Cake’, which was crated by the Karl Marx Confectionary Factory and is one of their most famous desserts, now seen as a symbol of Kiev itself. I’m using the term ‘cake’ here rather loosely, as this is technically probably more of a gateaux, featuring layers of meringue and buttercream fillings. My recipe is adapted from this recipe at GrabandGoRecipes, though I did end up making a few differences to the eventual result, starting by downsizing the recipe to make a more reasonably sized cake for two people!  Nevertheless it is absolutely delicious and I cannot recommend making this enough!

As a side note, does anyone know why the Balkan countries seem to have a preference for complex layer cakes? It seems to be a common trend within the Eastern European countries not shared with those of the western countries. I can’t seem to find any rhyme or reason for this, but if you can enlighten me, I would be very grateful!

Like quite a few of the cakes that have featured from these region, the cake includes lots of different processes, so please read the recipe through first – it will help your baking run a lot smoother!

First, preheat the oven to 350°F/170°C/Gas Mark 4 and line and grease a baking dish ready for use later. Start by making the sponge; separate your eggs and beat the egg whites and sugar until they form stiff peaks. In a different bowl, beat the egg yolks until pale before adding the flour and vanilla extract. Fold the egg white mixture into this, being very gentle so as to not knock the air out of the egg whites. Pour the mixture into the baking tin and bake for 25-30 minutes, testing with a toothpick to see if it is complete. When it is done, take it out of the oven and set aside to cool before removing from the tin.

Once the cake is out of the oven, turn the oven down to 250°F/120°C/Gas Mark 1. Prepare your dish for the meringue – this needs to be the same size as the cake, so if you do not own two dishes the same size (let’s face it, most of us probably don’t!), then wait for the cake to cool, remove from the tin and wash and re-line the tin. To make the meringues, whip the eggs whites  and sugar (added in small amounts) on high for about 5 minutes until they form stiff peaks. Spread the mixture into the tin and bake for 4 hours in the oven (you might want to set a timer and go and do something else whilst this is happening!) Take it out and carefully peel the meringue layer from the parchment paper. [Note: because this part is so long, I would suggest doing this the day before if you are not in a rush – the meringue will be fine sitting on the side all night as long as you cover it.]

Next, time to make the syrup and the cream cheese frosting. The syrup could not be easier – stick the whole lot in a blender and puree until smooth. The frosting is not much harder; start by beating the condensed milk and butter before gradually adding in the cream cheese. Once this mixture is nice and thick, stir in the whipped cream (on a slower speed if using a machine).

Now comes the fun bit – putting it together! I would do this on the plate you intend to serve it on – it makes life so much easier! Start by slicing the sponge cake into two layers using a long, serrated knife. place the bottom half on the plate and top with some of the syrup, waiting for about 5 minutes to ensure all the syrup has soaked into the cake. Spread a thin(-ish) layer of frosting (about 1/4) o the top of this and top with the slice of meringue trimming the edges as necessary. Spread some more cream onto the top and top with the remaining sponge cake, again soaked with the remainder of the syrup. Top with the reminder of the frosting (traditionally you would also cover the sides of the cake, but I prefer to have a little less frosting! Decorate with crushed meringue (reserved after you trimmed it earlier), chocolate and toasted hazelnuts. Leave to chill slightly and enjoy!