So today was the first day of the road trip, which for those of you not in the know will take us from Phoenix to Vancouver, via many national parks and cities in the process. For the next 10 days I will be (hopefully) trying to blog both a little about the trip itself, but also about the food and other scrummy things that we sample en route!

Today we started by getting the car which is huge, as you can see below – I have a whole three seats to myself! It’s also well stocked with water and a mini tuck shop put together by Chloe (including the adorable sticker decorations!) 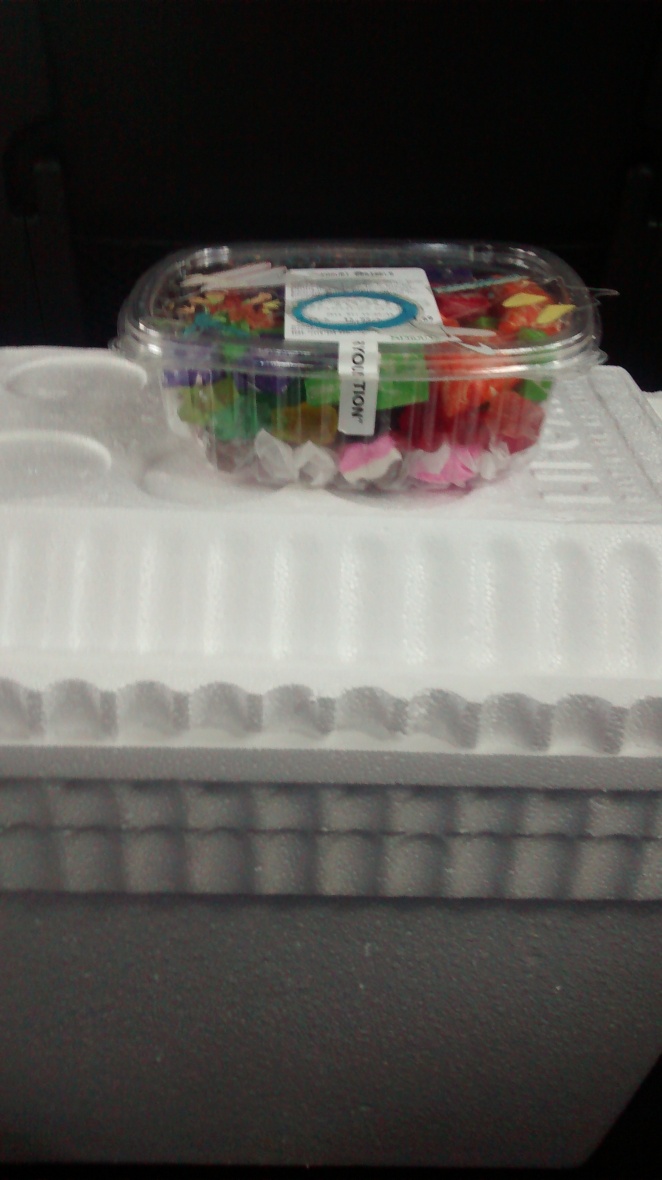 We started up the country by heading to Sedona, land of the red rocks, as you can see below. Now after a while of being in Utah, you get a bit more used to seeing red rocks, but for me the first time it was amazing, more like a painting than an actual place.

Next we headed to the Meteor Crater, by Wilmsow (via Oak Creek Canyon) Now having a space fanatic in the car made this a must-see, but all of use were slightly amazed at the size of it! My camera can’t get all of it in, and there is a 6 foot spaceman at the bottom who is invisible to the naked eye!

Next we got back in the car for the long stretch of drive for the day, taking us up to Kanab on the Utah-Arizona border. However before we got their we planned to stop at Horseshoe bend. However, this was easier said than done as we initially took the wrong turn. Not good. However, when we finally got their (and trekked a mile across soft dry sand – my nightmare terrain!) the view was completely worth it, and probably the best thing I saw all day! For some reason no-one but Max and I were standing at the best viewpoint, which I can’t understand, but it did give us a pretty much uninterrupted view!

From there were drove the final 2 hours to Kanab, where we stopped for the night. Our body clocks were totally out of sync, as we’d forgotten that Arizona and Utah run on different time zones – that’ll be fun tomorrow! However, it was time for food, and as I’d existed for the day on a muesli bar and a few Starburst I was hungry! We planned to go to a small restaurant called the Rocking V Cafe, which was just down the road from our hotel, and despite having to wait a little (we’d arrived at a busy point with no reservation!) it was well worth it! I enjoyed a starter of tomato and basil soup with bread and the most random balsamic vinaigrette – it looked more like mayonnaise! However, it did taste like its namesake, so we can’t complain! This was then followed by a plate of Cajun salmon with wild rice and grains, served with creole-style salad and asparagus, and was totally delicious.

After this, despite the sizeable meal, when the server asked if we had room for pudding, I couldn’t turn down a piece of Key Lime Pie, it being on my American desserts list and all! I’ve never had this before (only the flavouring in cheesecake form) and was excited to try a real slice! I was initially surprised to realise that the white stuff on the top was whipped cream not meringue, but this was in no way a disadvantage, and actually I quite enjoyed it. It was tart, sweet and smooth and the perfect end to a long day.

Overall we were really pleased with the Rocking V Cafe, and plan to go back there tomorrow as well. So if you are ever in Kanab, Utah it’s definitely the place to eat!